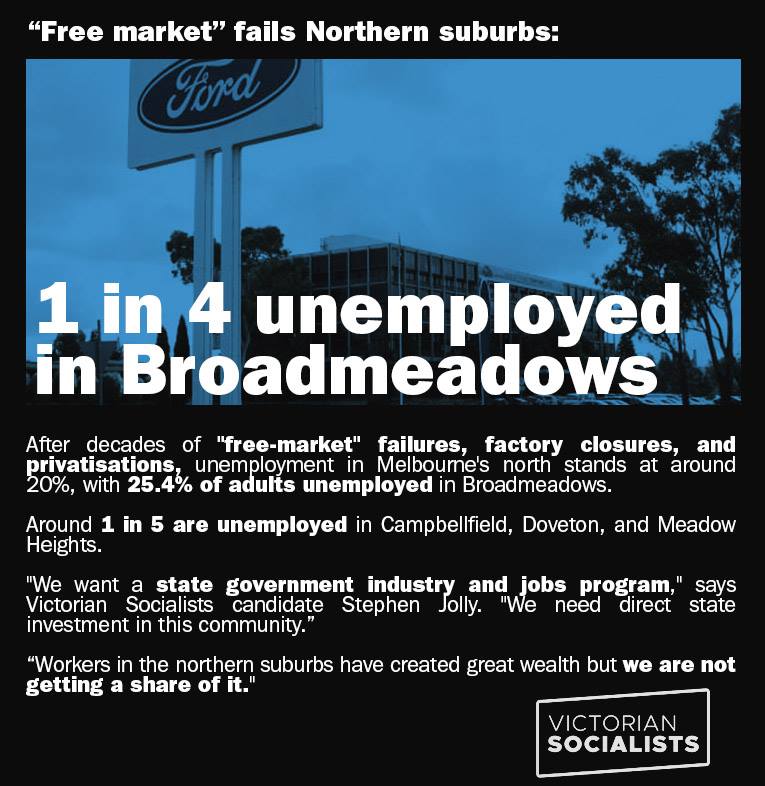 “It is 18 months since the Ford factory closed down and we’ve seen other factory closures. State and federal governments have left it to private enterprise and the market to create replacement jobs. That hasn’t happened or we wouldn’t have such massive unemployment levels,” said Jolly.

“The unemployment rate of more than 25% in Broadmeadows is a national scandal and needs an emergency response by state & federal government.” said Victorian Socialists candidate and Moreland councillor Sue Bolton.

“The government should play a major role in creating a fair economy with good jobs, training, affordable housing and great services – paid for by a ‘community investment’ tax on the developers and road builders who are making billions in the boom,” said Jolly

“We want a state government industry and jobs program to replace the car industry and the Ford plant in Broadmeadows with manufacturing and new skilled jobs open to all: a cutting-edge recycling plant, with new TAFE training for green industry jobs, solar and wind power production plants,” he added.

Part of our jobs plan, said Bolton, is that we need the construction of 50,000 new public housing dwellings in Victoria. We need a rail extension from Craigieburn to Wallan and new rail services. We need direct state investment in this community. Workers in the northern suburbs have created great wealth but we are not getting a share of it.”