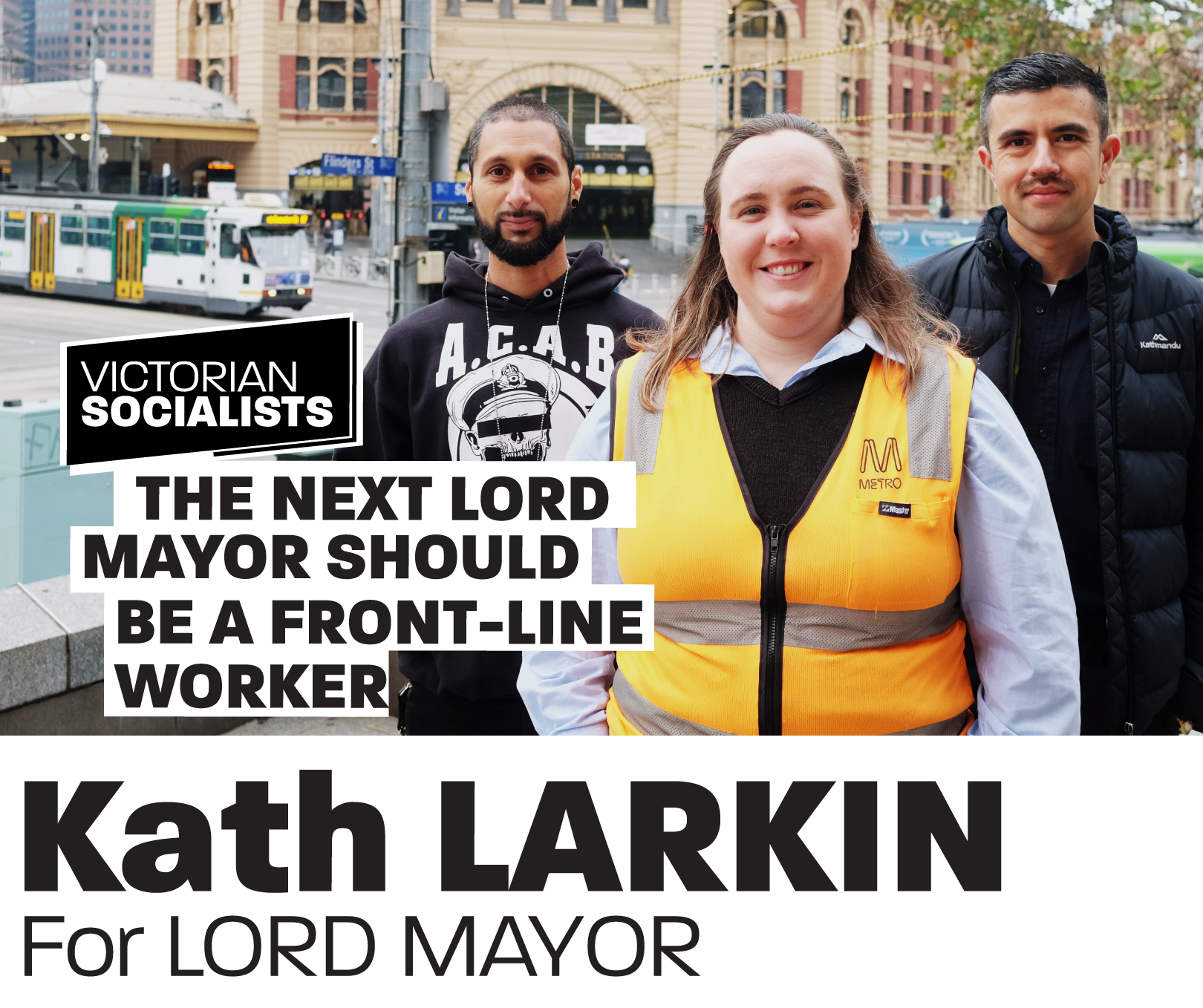 A frontline worker should be the Lord Mayor of Melbourne. Toorak toffs like Robert Doyle and pawns of big developers like Sally Capp think they are born to rule this town. Well how about Melbourne being run by one of the people who actually makes our city run?

We are your Victorian Socialists team for Lord Mayor and Deputy Lord Mayor of Melbourne.

We’re sick of this city being run by and for business interests. It’s the only local council where business owners, like the hospitality bosses who commit rampant wage theft, get extra votes.

Meanwhile hundreds of thousands of workers, who staff the stations, drive the trains, trams and buses, serve you in the restaurants, clean your office blocks and the streets, care for the sick and teach the students, are denied a say. We’re the ones most exposed to COVID-19 as frontline workers. We’re the ones who have lost our jobs or seen our shifts cut.

Kath Larkin is a rail worker at Flinders Street Station, where she became the first woman to be elected as a delegate for the Rail Tram & Bus Union in that workplace, and was one of the rank and file leaders in the first strike on the Victorian railways in almost two decades in 2015. More recently her union activity centered around fighting for safer workplaces and economic security in the face of the COVID-19 pandemic. Kath was one of the organisers of Blockade IMARC (International Mining and Resources Conference) in 2019 - a gathering of some of the world's worst climate criminals.

Daniel Nair Dadich is a first generation Australian and the son of migrant and refugee workers. Daniel began attending protests in 2000 when he skipped school to attend the S11 protest. While studying Daniel volunteered at the Asylum Seeker Resource Centre which opened his eyes up to the injustices that asylum seekers face in Australia. Upon graduating with a Masters in Social Work, Daniel has worked at two organisations now, supporting asylum seekers waiting in limbo for the Immigration Department to make a decision on their refugee claims and supporting refugees to build a new life in Australia. In both workplaces he became the Australian Services Union delegate.

Together, we would revolutionise the position of Lord Mayor. A vote for us is a vote against the status quo. 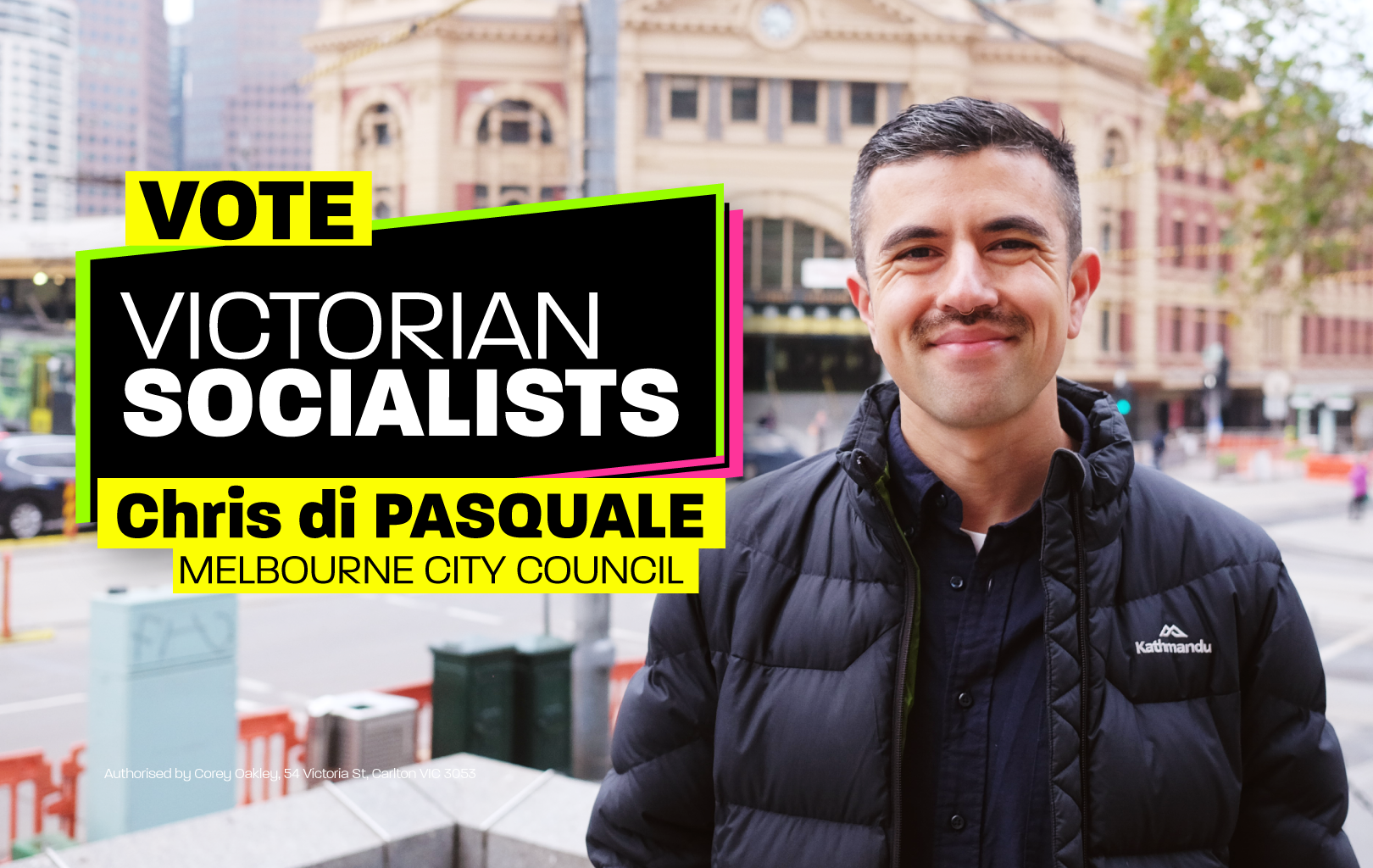 I’m an ESL teacher in a private college in the CBD and I see firsthand the effects of neoliberalism on this city’s poorest. I’m also a socialist who’s fought and helped lead many campaigns in defence of society’s oppressed and exploited, such as against cuts to higher education, against racism and the far right, and for LGBT rights.

What makes Melbourne great isn’t its laneways and street art. It’s that this city has a history of struggle and protest. Melbourne is where two Aboriginal freedom fighters Tunnerminnerwait and Maulboyheenner, were hanged for resisting invasion. Melbourne is where stonemasons at Melbourne University downed tools to win the eight-hour day. Melbourne is where Zelda D’Aprano protested to win equal pay for women.

As a socialist voice on council, I want to stand in this tradition of radical Melbourne. This means fighting corporate developers trying to privatise every square inch of public space. This means defending public housing residents from a state government that wants to sell them out. This means tearing down monuments to genocidal colonists so that we can have an honest lesson in the history of this city’s founding. This means fighting for the rights of workers and the poor who have to live and work in the city, over the interests of bosses who have undue sway over how the city runs.

Melbourne could be a liveable city for all, but only if we fight for it.