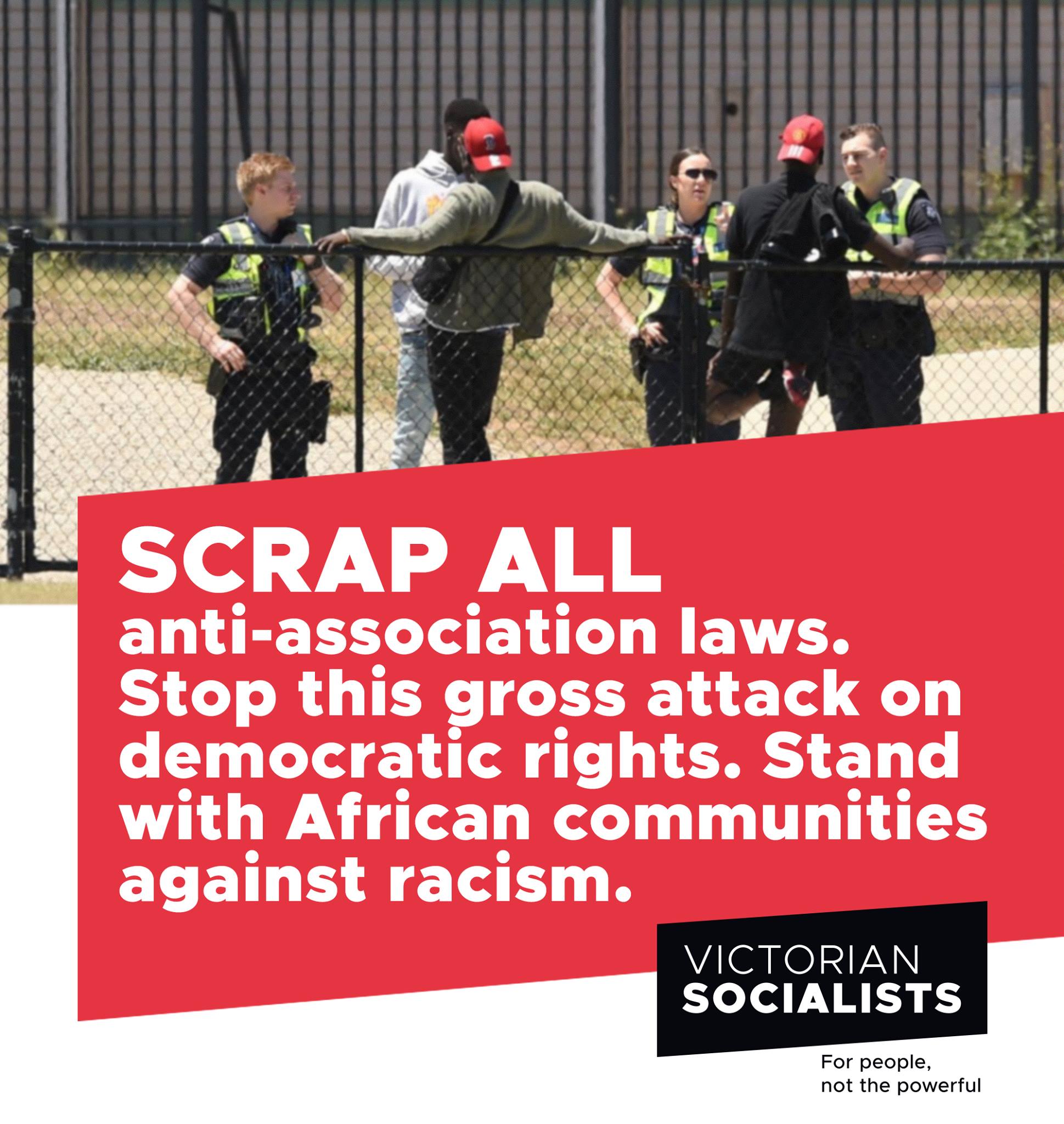 Risk of jail for teenagers who have committed no crime.

Liberal party politician Matthew Guy associates with key mafia figures, politicians are free to associate with white collar criminals but young teenagers who associate with any person who has committed a crime, could be jailed for three years if new Victorian laws get passed.

The government is alarmingly attempting to extend the anti-association laws that have been used against bikies to teenagers as young as 14.

Current Victorian law already allow a small number of senior police to ban teenagers from associating with someone who has committed a crime. If passed, the new law would allow almost 2500 more police to issue the bans.

These new police powers are ripe for serious abuse.

In NSW where such laws already exist, the laws have been used in a discriminatory way against the Aboriginal community with the majority of bans being handed out to Aboriginal people. Given that we already have a big problem in Victoria of the police using racial profiling, to harass young people from African backgrounds, or just anyone who is black.

Indications are that the new law will not only ban young people from being in the company of a person who has committed a crime, but will also ban them from having any contact via social media.

We have already seen how ridiculous the anti-association laws are when they have been used against motor bike riders who have committed no crime.

In a stunning case in 2014, five old school friends, some of whom were bikies, were arrested when they went down the street to buy ice creams for their kids at the Gold Coast. The case was thrown out of court, but only after the friends had spent two weeks in jail for buying ice creams as a group.

The government claims that IBAC (Independent Broad-based Anti-corruption Commission would monitor the new laws to make sure that they aren’t misused. But IBAC hasn’t held violent police to account for using extreme violence against innocent people.

Earlier this year, a spate of violent police assaults on innocent people were exposed in the media. The main reason for them being exposed is that there was footage of the police assaulting people. IBAC did not hold the police to account. There are many cases where the police abuse their power but the victims don’t come forward because they think they won’t be believed, especially as police investigate police.

The state Labor government is responding to the most gross racist attacks on young people from African backgrounds by top Liberal Party politicians like Peter Dutton and Malcolm Turnbull by criminalising young people who have committed NO crime.

There is no “African” gang problem in Victoria. What we have is a police racism problem and an issue of young people being discriminated against for jobs and housing because of the colour of their skin.

Where crime exists, it cuts across all ethnic groups including people from Anglo backgrounds.

People should be free to socialise with whoever they want to. The Victorian Socialists call for all anti-association laws to be scrapped and the establishment of a fully independent police complaints authority.

Victorian Socialists oppose authoritarian measures to deal with social problems. Instead, we want to address high unemployment and lack of education access in the outer suburbs.

We need to address these issues by making TAFE free and injecting more funding into TAFE to reverse the many years of funding cuts.

To address high unemployment, the state and federal governments need to directly invest in the creation of new high-tech industrial jobs to avert the social crisis of massive unemployment.

We need to address jobs and education, not giving police more laws that can be used for racial harassment.