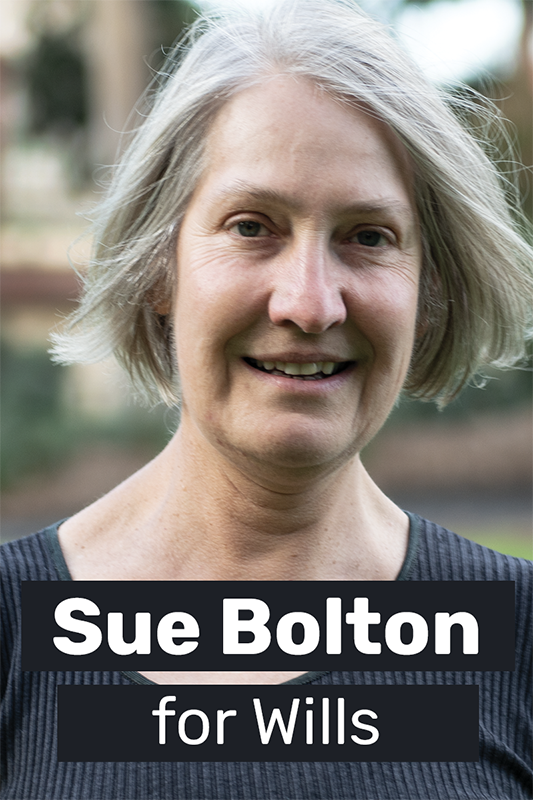 Sue Bolton is the Victorian Socialists candidate for Wills. Sue has been a socialist councillor on the Moreland City Council since 2012. She has a strong record of standing up for her community against greedy developers and to demand action on the toxic waste dumps that scar the northern suburbs. Sue initiated the campaign for more trains on the Upfield Line. She also has a proud record of standing with Aboriginal people. In 2017 she was central to the push to cancel celebrations of Australia Day (Invasion Day) in Moreland.

Sue stands for policies that put people before profit.

We have a housing crisis with homelessness spiralling out of control and many people struggling to pay rent or a mortgage. The market has failed to provide affordable housing. Victorian Socialists are campaigning to freeze rent increases for five years and then peg future rent increases to inflation. 50,000 public housing units should be built over the next five years in Victoria to address the housing crisis and 20% of all new private developments should be low cost housing.

Politicians are out of touch with ordinary people. No wonder, when their salaries start at $207,100 a year. Politicians should be on a worker’s wage. Sue Bolton, along with all Victorian Socialists candidates, has pledged to only take $87,000 a year, the wage of an average public servant (a nurse or a teacher), and to put the rest into community campaigns for better services.