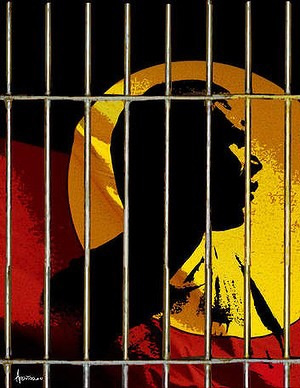 There's a lot of things being talked about for the new Victorian state inquiry into the over-representation of indigenous kids in youth detention, announced today.

But there's one word that you won't find.

The inquiry, to be conducted by the new commissioner for Aboriginal Children, Justin Mohamed, is to look at issues of mental illness, homelessness, non-family care, in trying to determine why indigenous kids make up 16% of the youth incarceration system, while being 1.6% of the population.

But it won't be looking at the real causes: racist policing of indigenous and African-Australian kids, being locked up for minor non-violent infractions, for things that white middle-class kids would get away with, or simply for nothing at all.

"Indigenous and African-Australian kids are being targeted because they're black. The Andrews government won't acknowledge that."

"Any inquiry has to look at police racism, differentials in charging and sentencing, and above all, models for an independent police complaints commission with real teeth."

Victorian Socialists will fight side-by-side with communities across Melbourne being demonised by tabloid crime scares, blaming of victims of the court system, and a government out for quick law and order wins.

That's how to start on a road to real justice.